What is a Pre-Engagement Ring?

Pre-engagement rings are sometimes referred to as promise rings or friendship rings, which serve as a promise between one partner and another. Typically this promise is to remain committed to a monogamous relationship. However, there are subtle differences between the two ring types. One will typically give this if they are too young to get married to their prospective partner, while a promise ring does not necessarily involve a commitment to marriage. This is also not to be confused with a purity ring, which is a promise between two people that they will not have sex until marriage. They are sometimes called friendship rings, though a friendship ring is not exclusively used in the same context.

Pre-engagement rings gained a fair amount of attention both in mere (relative) common use, but also in its prominence use by public figures. One such example is of then-couple Justin Bieber and Selena Gomez. This saw pre-engagement rings experience a rise in popularity, though that petered out somewhat.

Pre-engagement rings may be used by young adult couples antique diamond ring(and rarely even be used by older couples), but in general, pre-engagement rings are more of a show of commitment by underage couples. This is due in part to the aforementioned inability for the couple to actually get engaged, but there is also a strong element of that kind of “young, innocent love.” This seems almost contradictory when you think about it, because marriage often represents something well beyond that. There is just something innocent about such an exchange – it’s not a proper commitment, but rather a show of one’s affections for another, and giving them something that they may not expect to get until their adulthood. 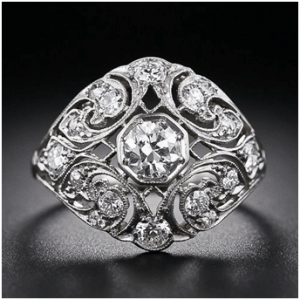 Pre-engagement rings also receive negative attention from people. One such criticism is that the rings are somewhat childish for people who are in their adulthood. There is also the question of whether it is problematic for kids to even be making such a strong (non-binding) commitment. For instance, does a pre-engagement ring set up the recipient(s) for disappointment? Because when all is said and done, young couples often break up. It’s an interesting question, as to whether such a commitment increases the likelihood of a couple staying together. But when you look at marriages and engagements, it doesn’t feel like it would improve it much (if at all).