Here are what many of my clients say were their engagement ring concerns when planning to get a ring.

Male: A salesperson can tell you one thing, but if you’re naïve or you’re the typical person who doesn’t deal with rings every day, you don’t know what is true or not. It feels like you can get taken advantage of. I hate the feeling where I’m out there just looking at a thousand different rings, not finding what I want, and yet I don’t know where to look.

Male: Assembly line. You go into a store and whoever’s up next, it’s almost like buying a used car where they just give you whatever salesperson’s in the cue. And you know, they’re nice and they’re friendly, but it’s just a generic ring with a generic diamond. There’s nothing unique or special about it. You know that they’re going to replace the ring you have with another one that looks just like it as soon as it’s out of the showroom, and that’s just not what I wanted.

Male: I’ve seen a million rings now, and they eventually all start to look the same. When you have a chance to work with an artisan, you get a chance to interject your own personality, your own meaning into the ring. Not somebody else’s design, and not somebody else’s idea of what they think looks beautiful. It’s your own, and it captures that moment for you as a couple. Male: You feel the pressure. I hate that pressure. With some salespeople it’s subtle, but you always feel it. With you, Vanessa, you immediately feel like you’re hanging out with a good old’ friend. As if you’re saying, “Let’s talk about this” rather than asking me to buy.

Male: I know I’m probably typical of anybody looking for a diamond ring in that I don’t know anything about it. I don’t know if I’m getting a good deal or a bad deal, or really anything.

Male: I guess just getting ripped off. It is a lot of money to buy something like this. To not get exactly what I want is what I’m concerned with.

Male: My biggest concern with jewelry stores in general is you do not know if you are getting a good deal or a bad deal, and I don’t mean just price wise. I mean quality wise. It’s a mixed bag. Unless you’re a jeweler, and very few people are, you have no idea if the setting, the stone is going to last, if it’s as pretty. In the bright lights, everything looks good, but when you get it out on the street, is that really representative of what you’ve paid for it?

Male: There are just so many different aspects to the ring that we’re not aware of. I think being able to work with you and having you kind of help us and guide us through that process was definitely a huge help for me and kind of calmed everything where you’re just like all right, you know you’re in good hands.

Female: She wanted to go to Cartier. We went there. She saw this ring. She absolutely fell in love with it, and I was like okay I want to get her this ring. I ordered it, and that seemed very fake to me. Then it came and it felt really like it wasn’t mine, you know, it was just “oh well, we’ll just return it”. There was something very devaluing about that ring. So a very expensive ring instantly became like a commodity that anybody could have. I don’t look at Jackie that way. It’s a unique, special thing that should be something that is created for the person that you love with them in mind when you buy it. Not this person has it, and that person has it.

Male: My experience with searching for rings before I came here was there are a lot of the big box stores. I looked online to kind of understand and learn about how rings worked. The big stores were daunting. There are thousands of rings, thousands of diamonds. It all kind of looks the same.

Male: When I first contacted you, I think I told you this is the color I want. This is the grade I want, and so forth, and you made me feel comfortable in actually seeing a real life diamond instead of just picking numbers off a chart. Undoubtedly, had I gone the other route and just said okay, I want a 2.5 carat cushion cut blah, blah, blah, maybe it wouldn’t have the characteristics of something that I’m actually having in front of me, and I really wouldn’t have had anything to compare it to. 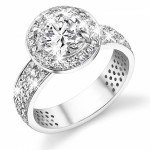 If you’re ready to take the next step toward the ring of her dreams, contact Vanessa Nicole Jewels. Based in San Diego, Vanessa Nicole is an award-winning designer and master diamond setter, serving clients all over the world. Every engagement ring and wedding band is created on-site, one at a time, for each individual customer. Contact Vanessa today to learn more and see how easy it is to get the perfect ring for the woman you love. Engagement Rings Custom Made are the best!