The most popular diamond cut is the Round brilliant cut, but right beneath it in the popularity list is the princess cut. 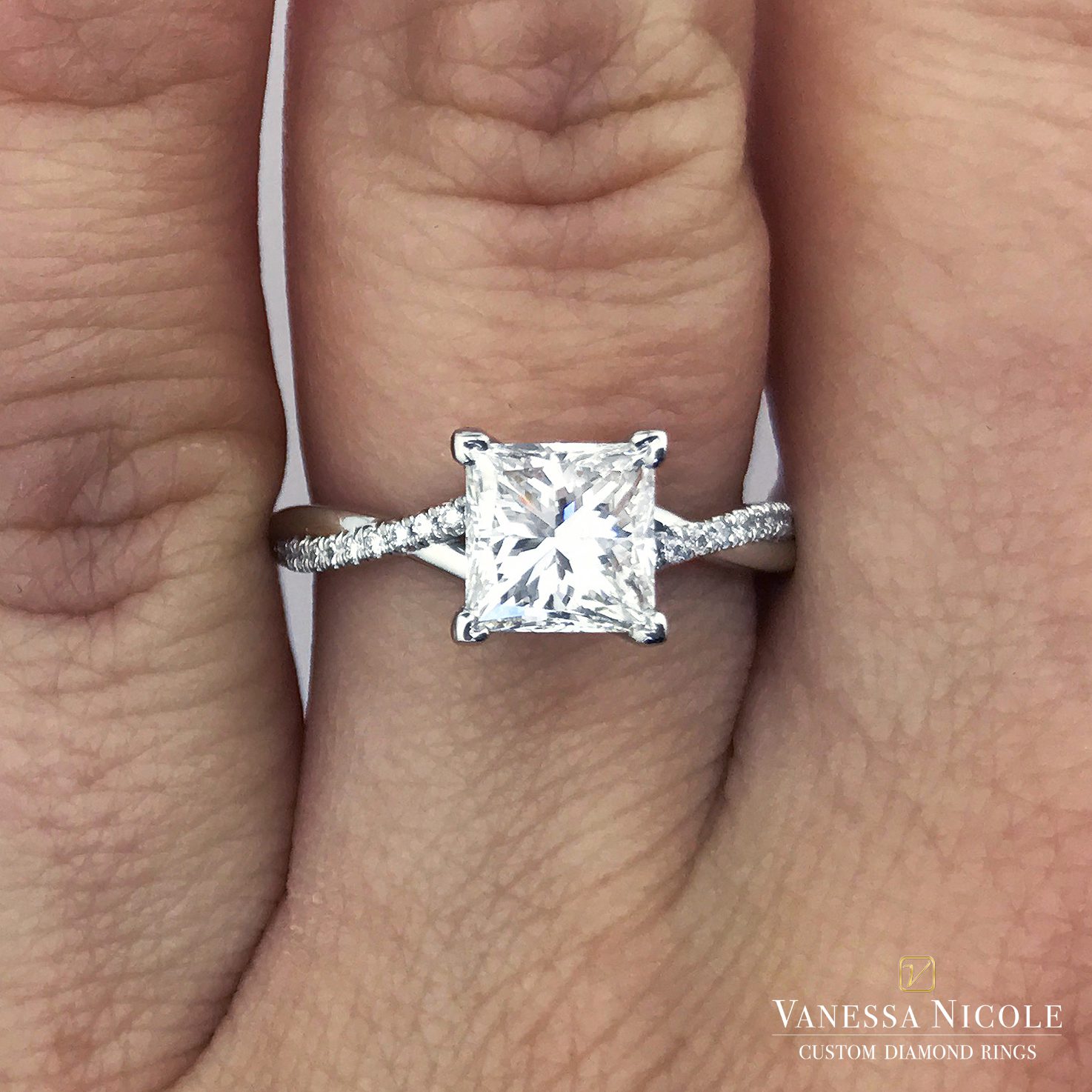 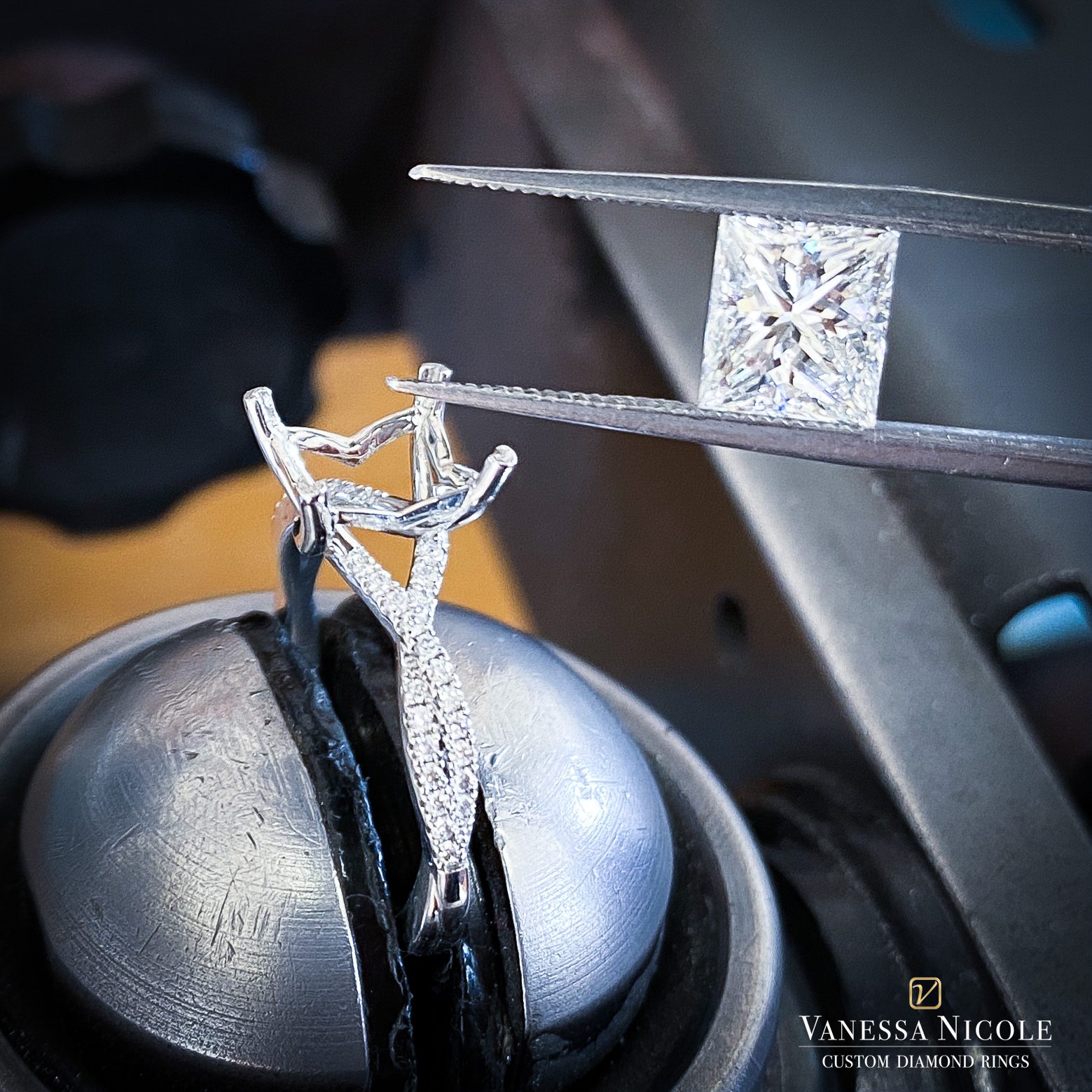 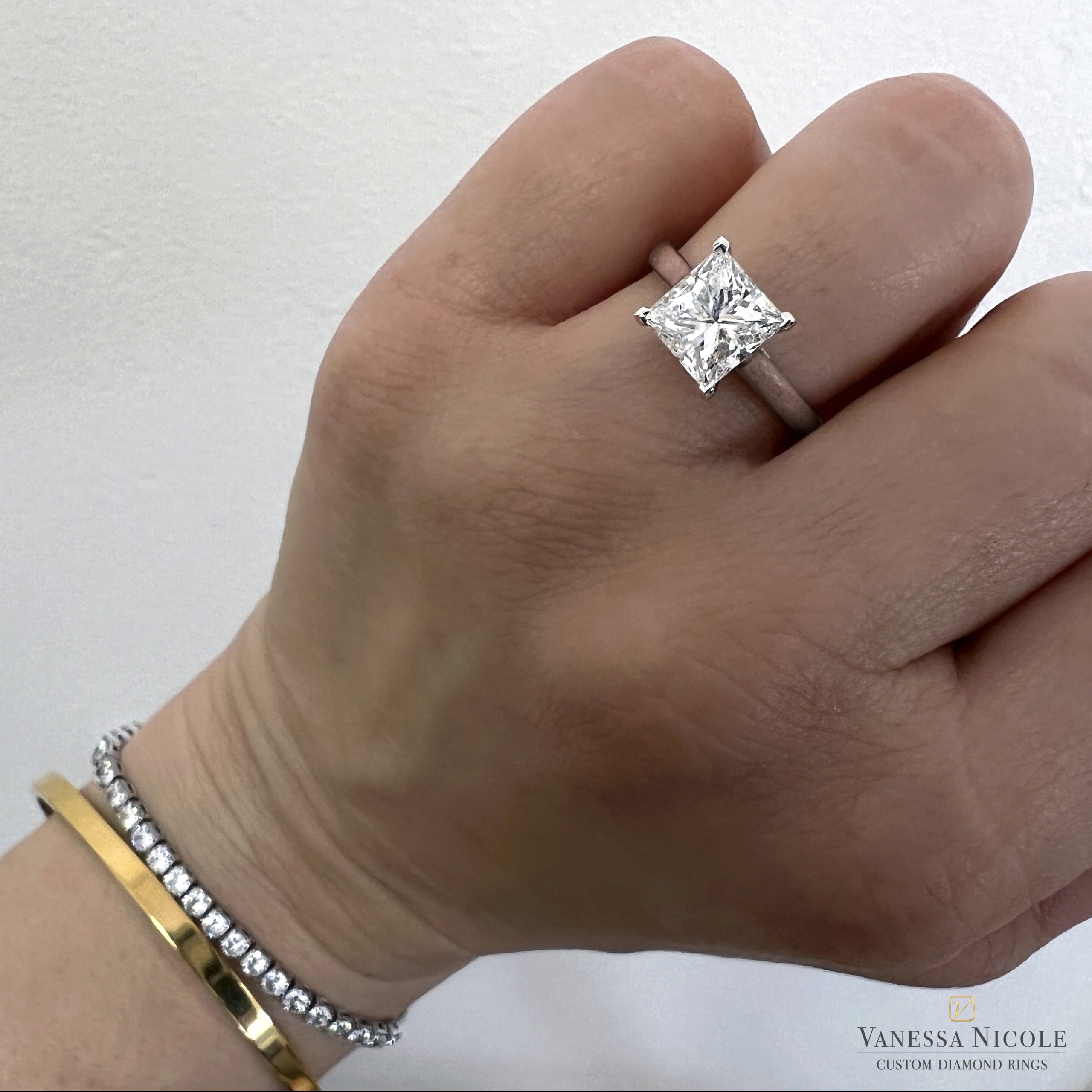 The name ‘princess cut’ dates back all the way to the 1960s, although what we now regard as the princess cut was created in 1980 by Betazel Ambar and Israel Itzkowitz. Its design – based around an early French cut – is square-shaped with a pyramid-like top.

With its linear nature and clean lines, it gives your ring design a more modern, contemporary look.  Its popularity is apparent, but the reason why it is popular is perhaps not quite so. 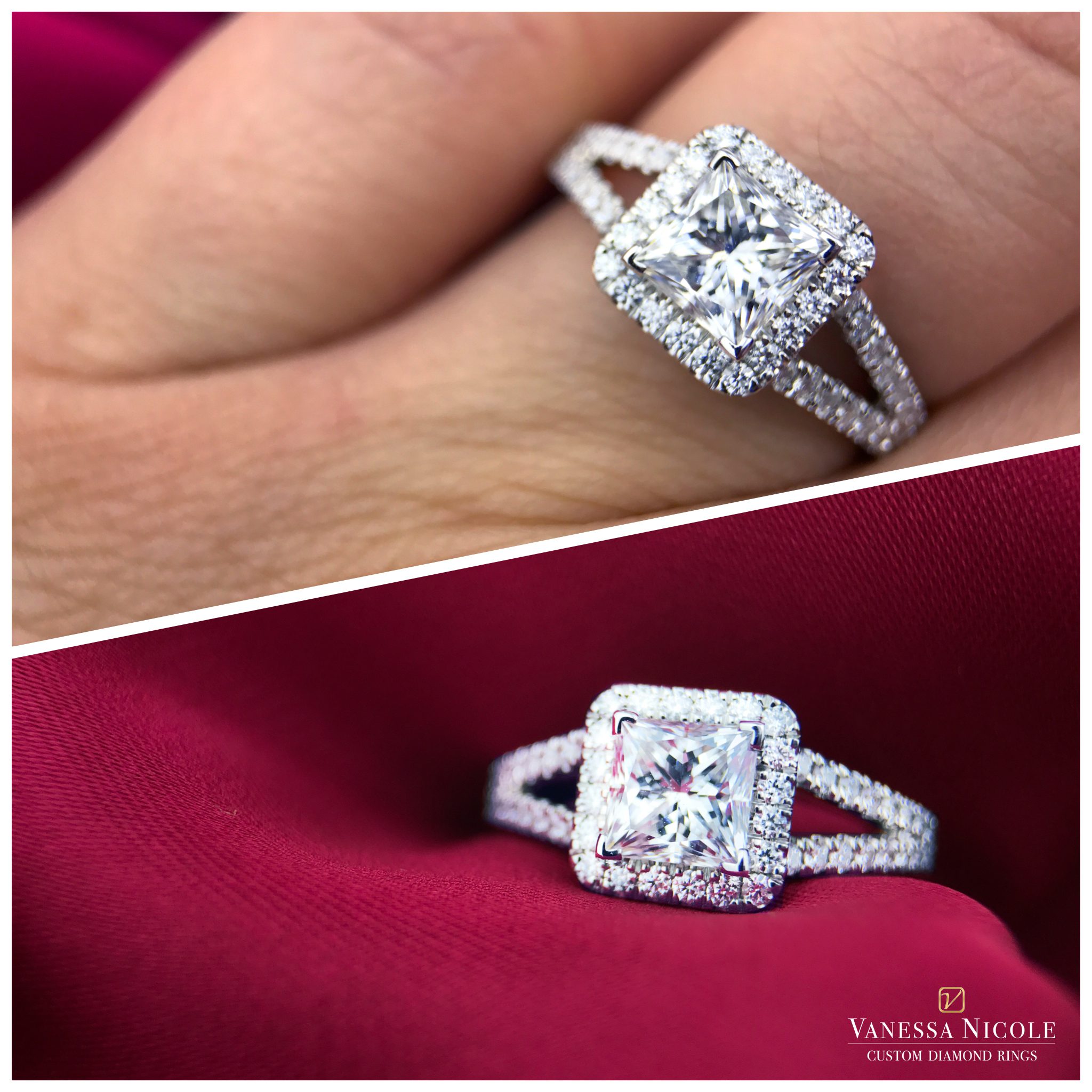 The popularity of the princess cut derives from a combination of the cut’s price and shape.

The princess cuts most obvious advantage over the round brilliant is price. Compared to the round brilliant cut, it is typically more economical, making it a lot easier for people looking for an engagement ring to find something gorgeous without having to break the bank.

In some settings, the princess cut may present some aesthetic advantages over the round brilliant cut, facing up larger. 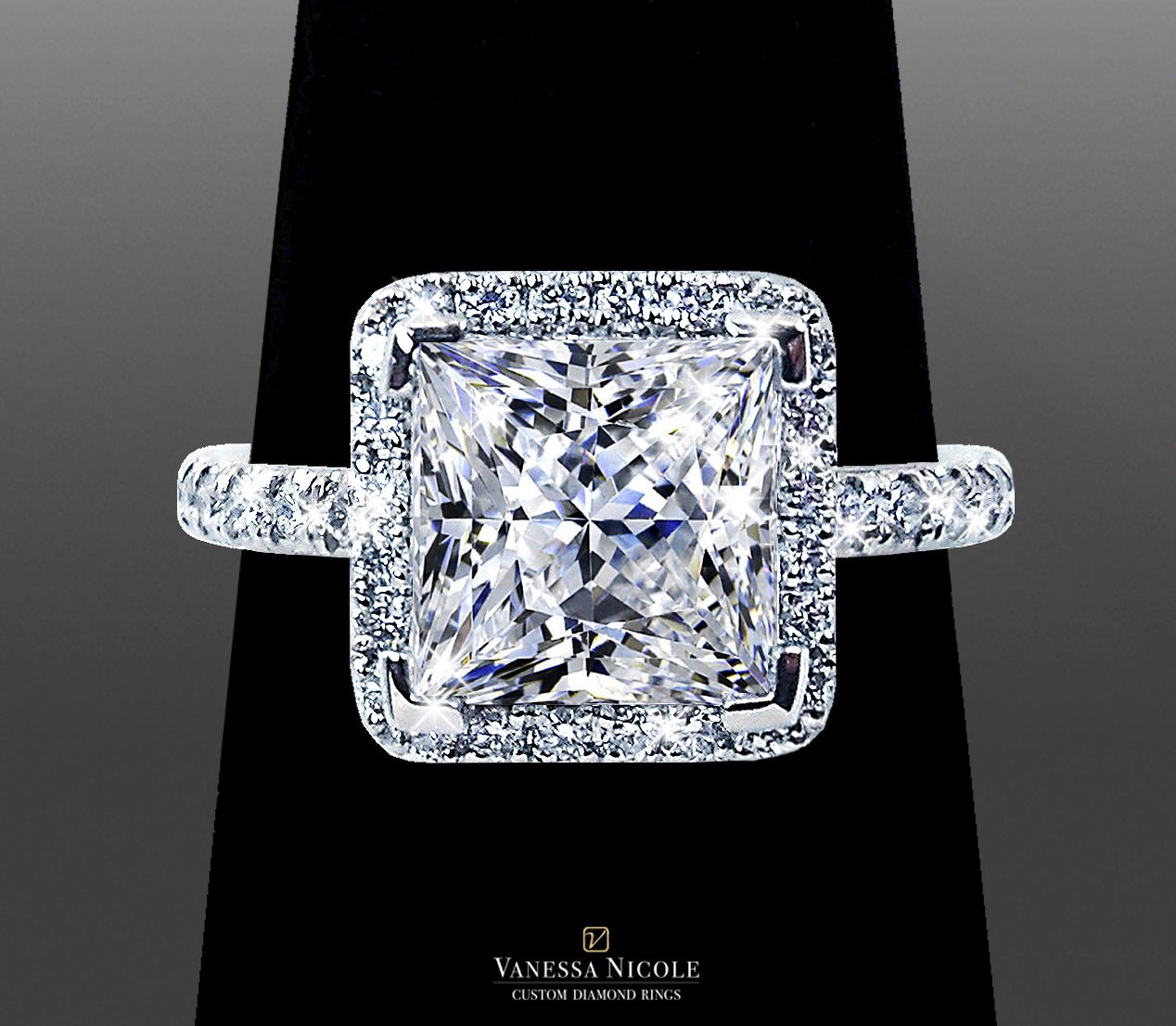 It was highly popular in the '80s and '90s, but its popularity levels were still fairly high in the 2000's and 2010's. The economy has certainly contributed to some extent, as with employment and wage levels at lower levels in these periods, some  looked to cut costs in any way that they could without sacrificing the sparkle factor.

One thing to consider is fragility – Because of the corners, the princess cut is at greater risk of being damaged than the round brilliant cut.  As with all diamond rings, it's highly recommended to have insurance on your ring no matter what the diamond shape is. 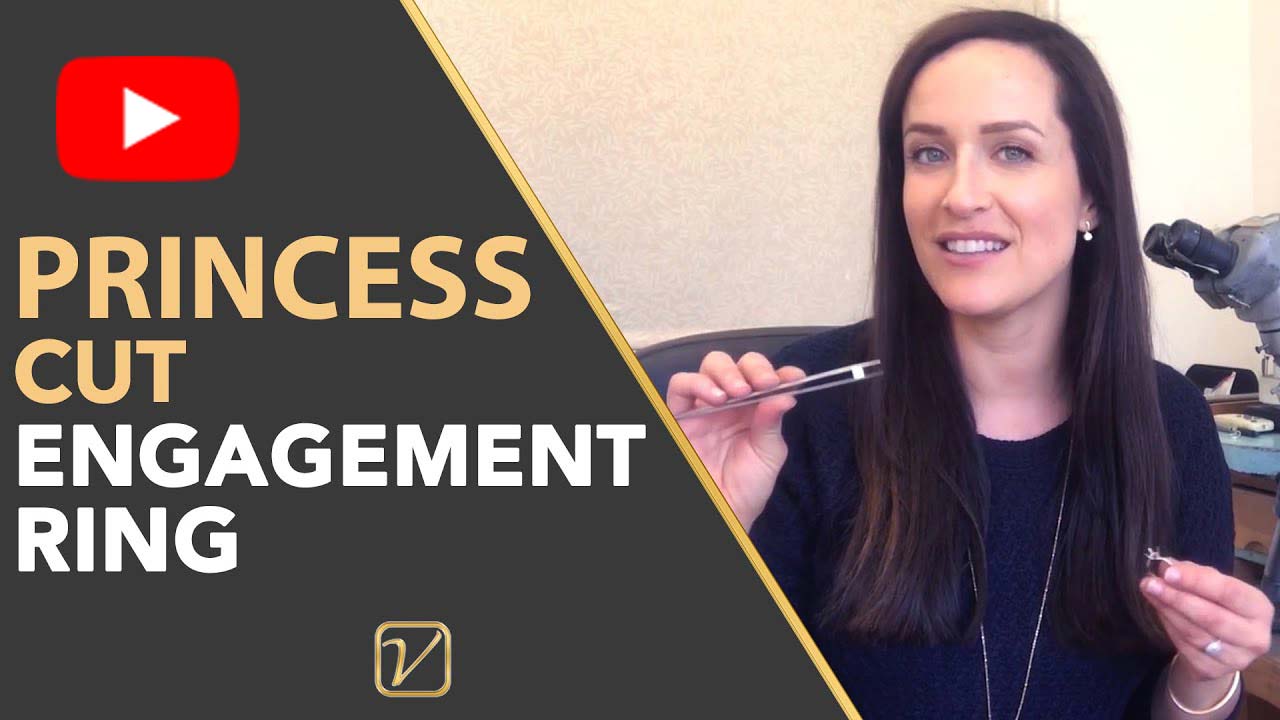 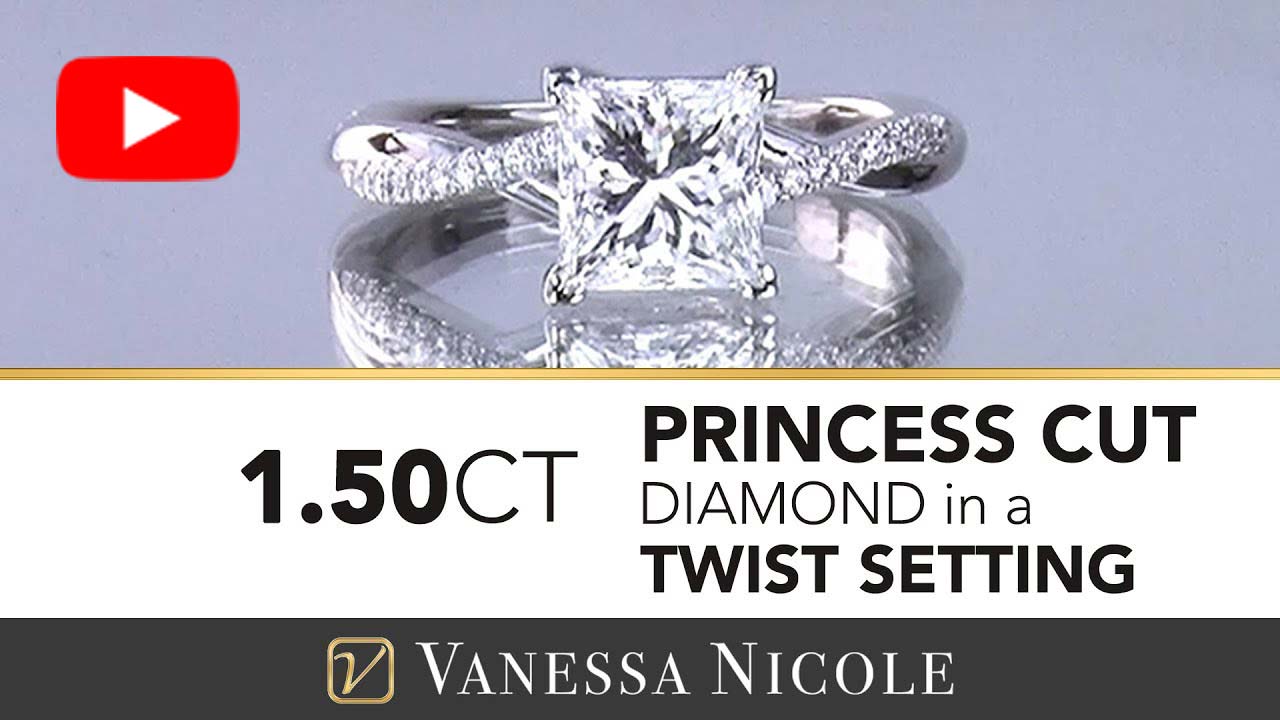 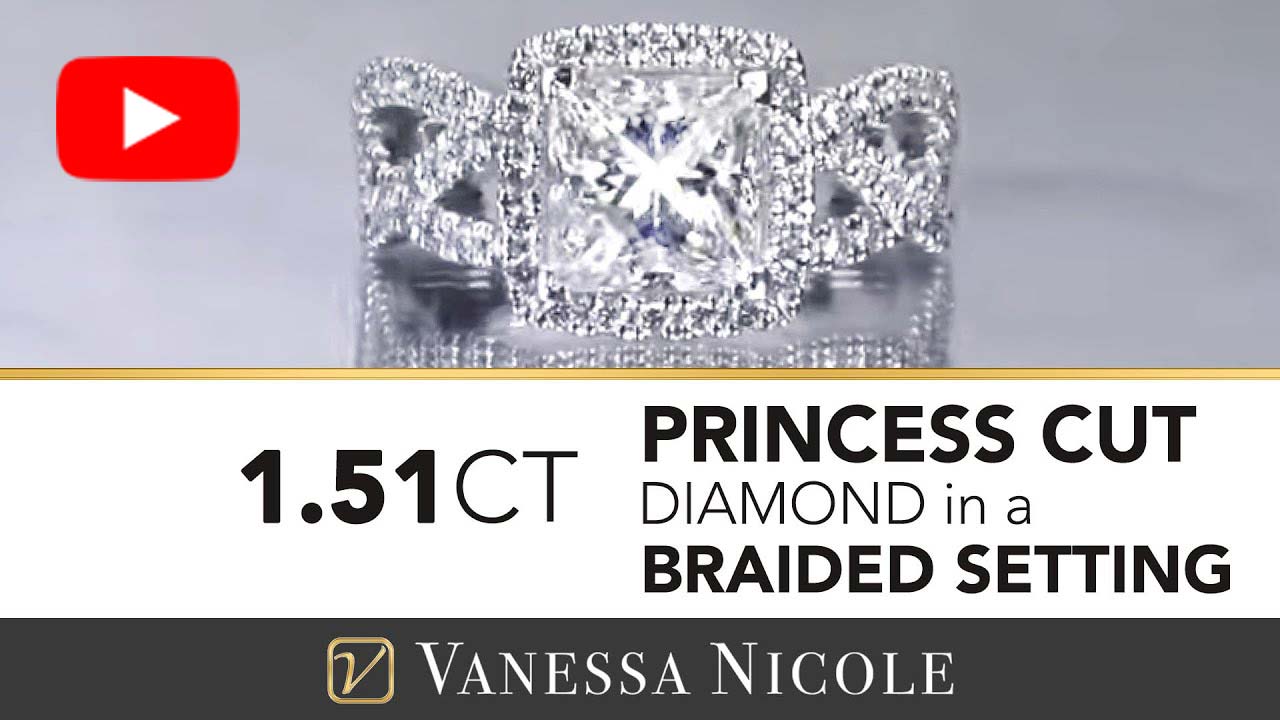 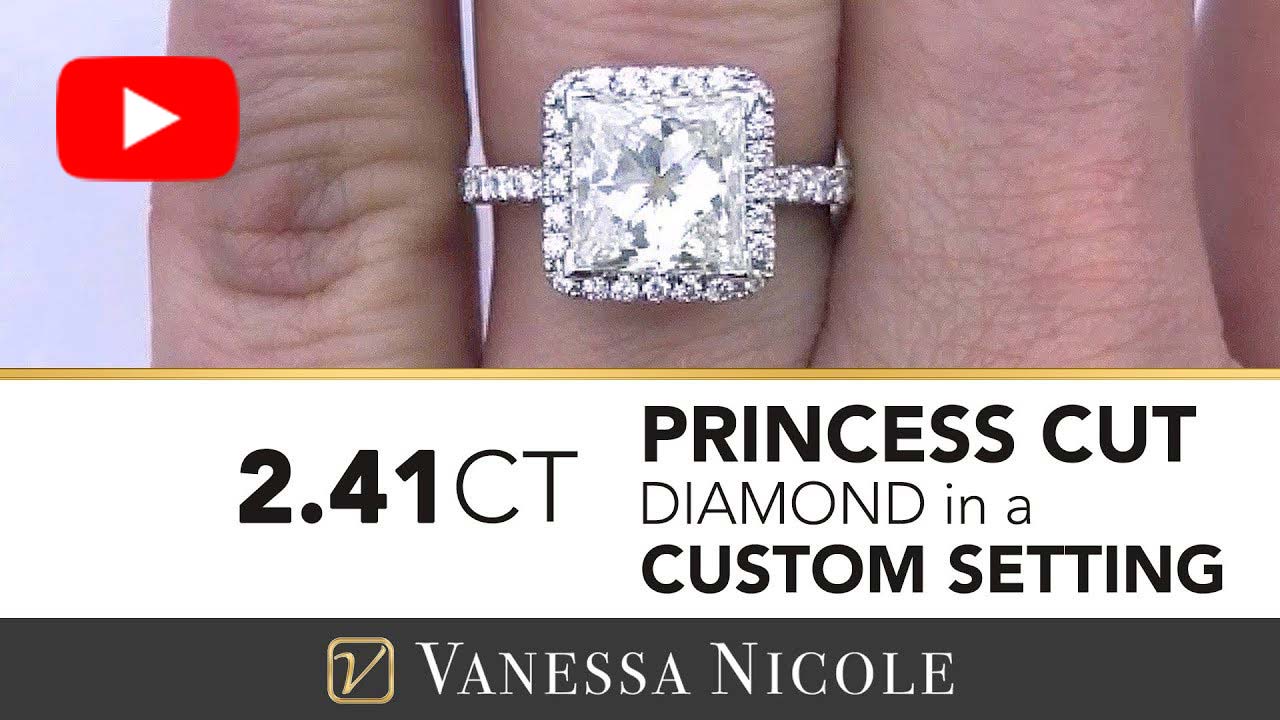 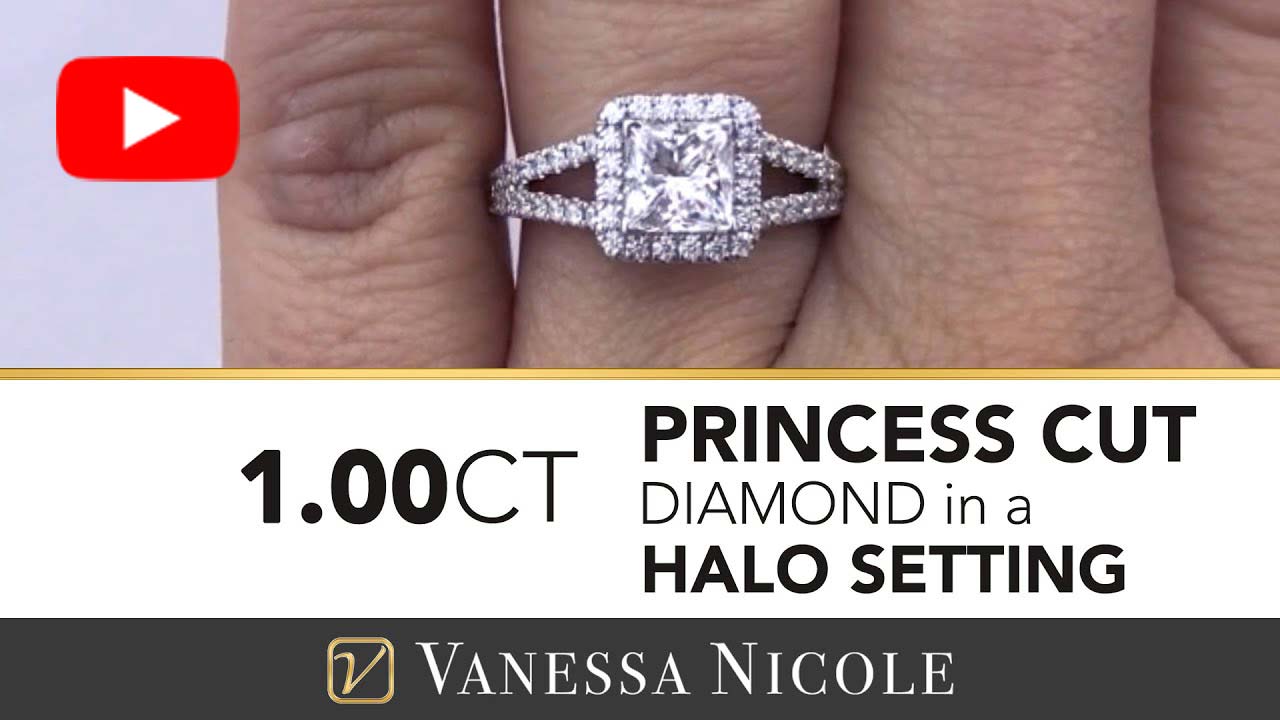 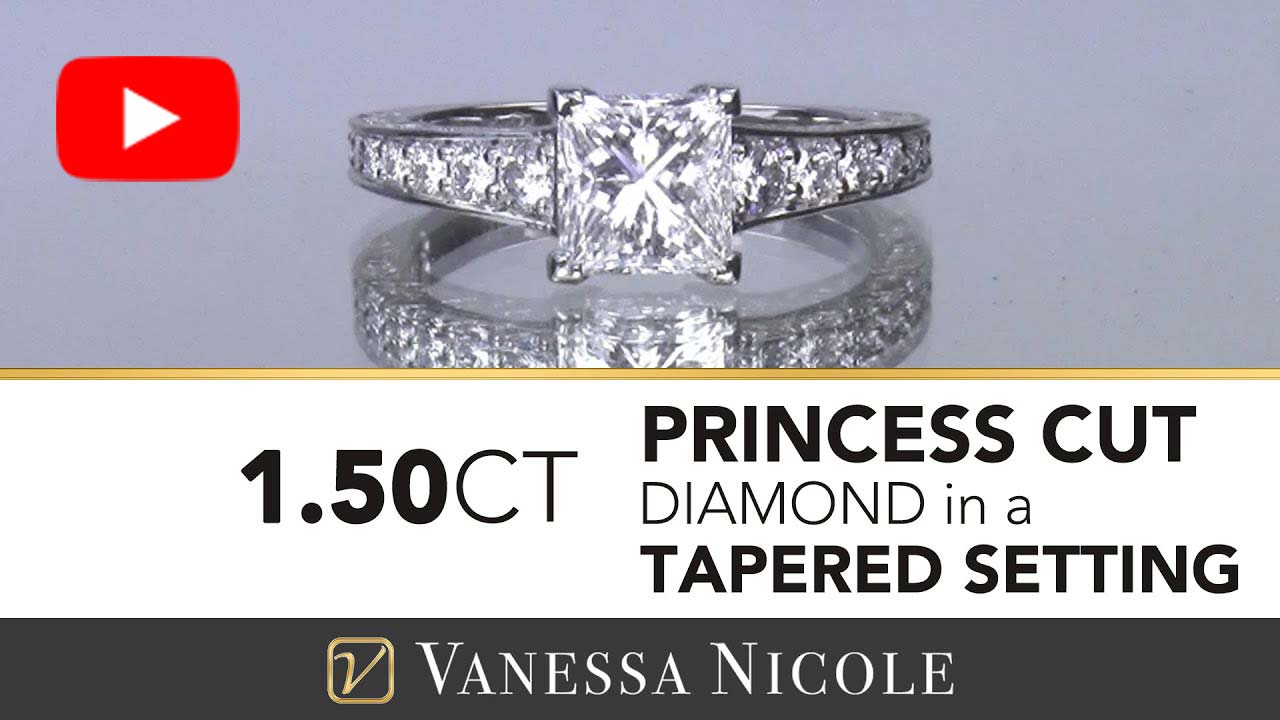 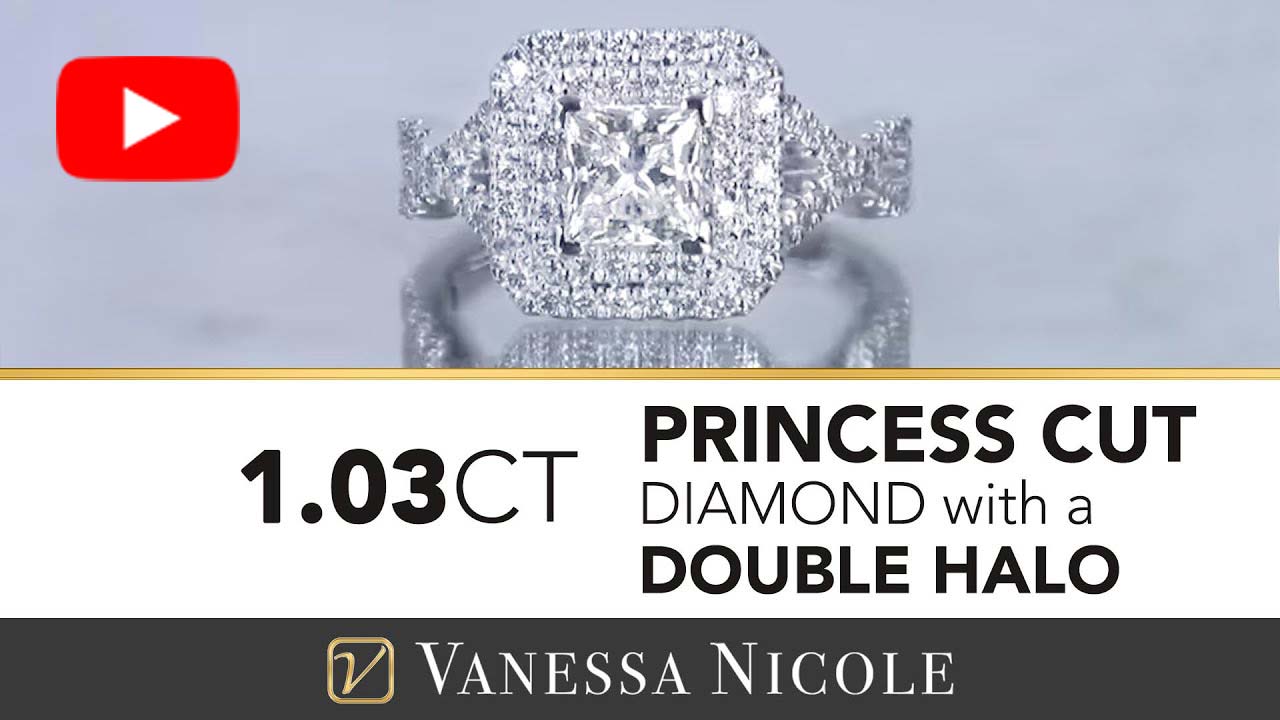 These are a few examples of Princess Cut Diamond Size & Qualities.

We would create your own personalized Diamond Selection for your custom ring. 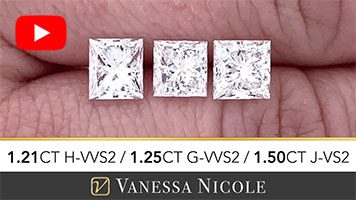 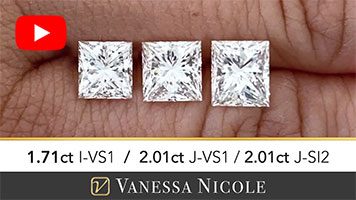 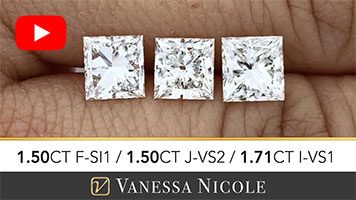 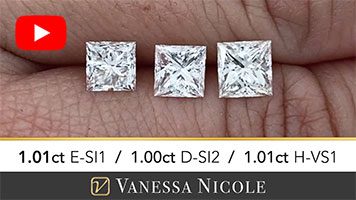 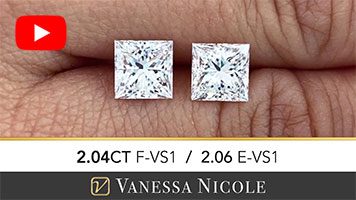 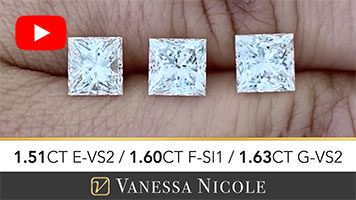 If there were 100 stars here Vanessa would get every single last one! The whole process was just so incredibly non-stressful. Everything from shipping the diamond, helping us decide on a style, the computer generated pictures to help us visualize, everything was just perfect!!

I tried big box stores, Tiffany’s, high end retailers, antique jewelry shops, and more. Enter Vanessa Nicole Jewels. Vanessa was responsive and accommodating from the very beginning, and she worked with us to ensure the best value for the money we could spend.

It sparkles like crazy!!!!!!!! I really am speechless! Our friends are also amazed. (They fell in love with you, hehe.) Thank you so much for the greeting card too! I melted when I read it! It’s so personal and I really appreciate it.

All you men out there contemplating going with someone else‚ you should think again!!! VNJ is the ONLY WAY!!! And this is coming from a pretty picky girl.

Of course I had my reservations because I live across the country from Vanessa and did not know what to expect from the whole process, BUT Vanessa was unbelievable!!! I cannot begin to tell you how easy it was from beginning to end. I had a lot of questions, and she happily answered all of them. If you are considering having your ring custom made, I would not hesitate to call Vanessa.

Vanessa’s customer service is fantastic and the speed at which she responded to my many emails was amazing. She helps remove the fear out of making such a special purchase, and her honesty is something I really appreciated. Vanessa’s attention to detail is perfect.

I live in Seattle and my fiancé lives in Oakland. I just proposed to my fiancé with a custom engagement ring designed and built by Vanessa Nicole. I could not have been more ecstatic with the entire process.”

The ring is absolutely GORGEOUS! The final product was so much better than I could have ever hoped‚ every other ring in traditional jewelry stores look like cheap toys in comparison!” 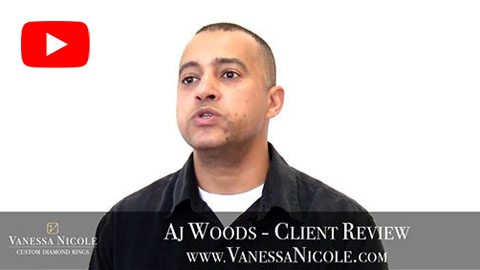 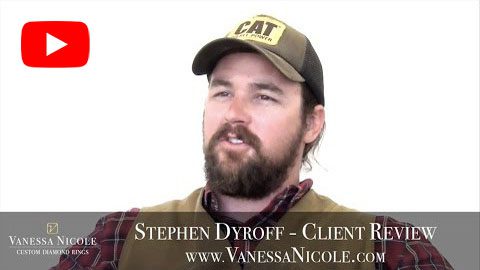 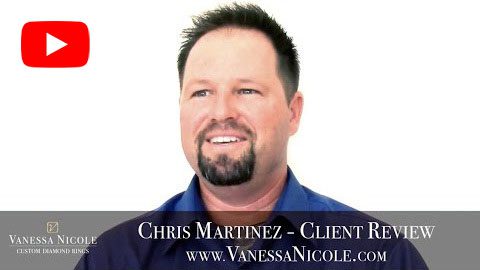 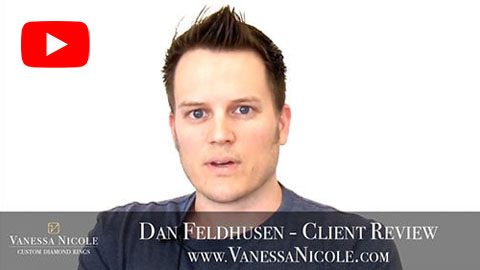 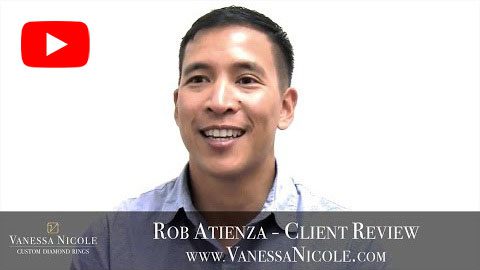 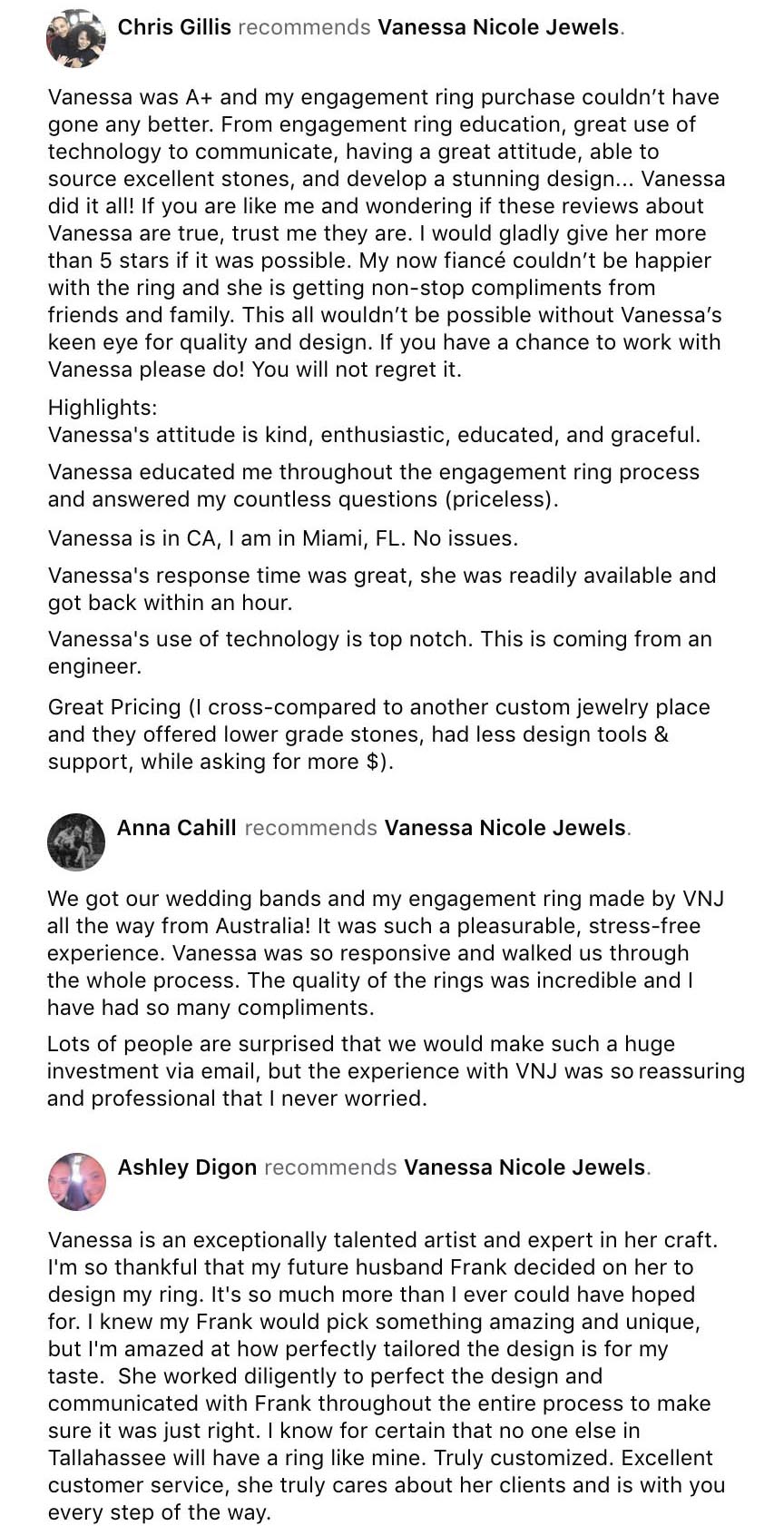 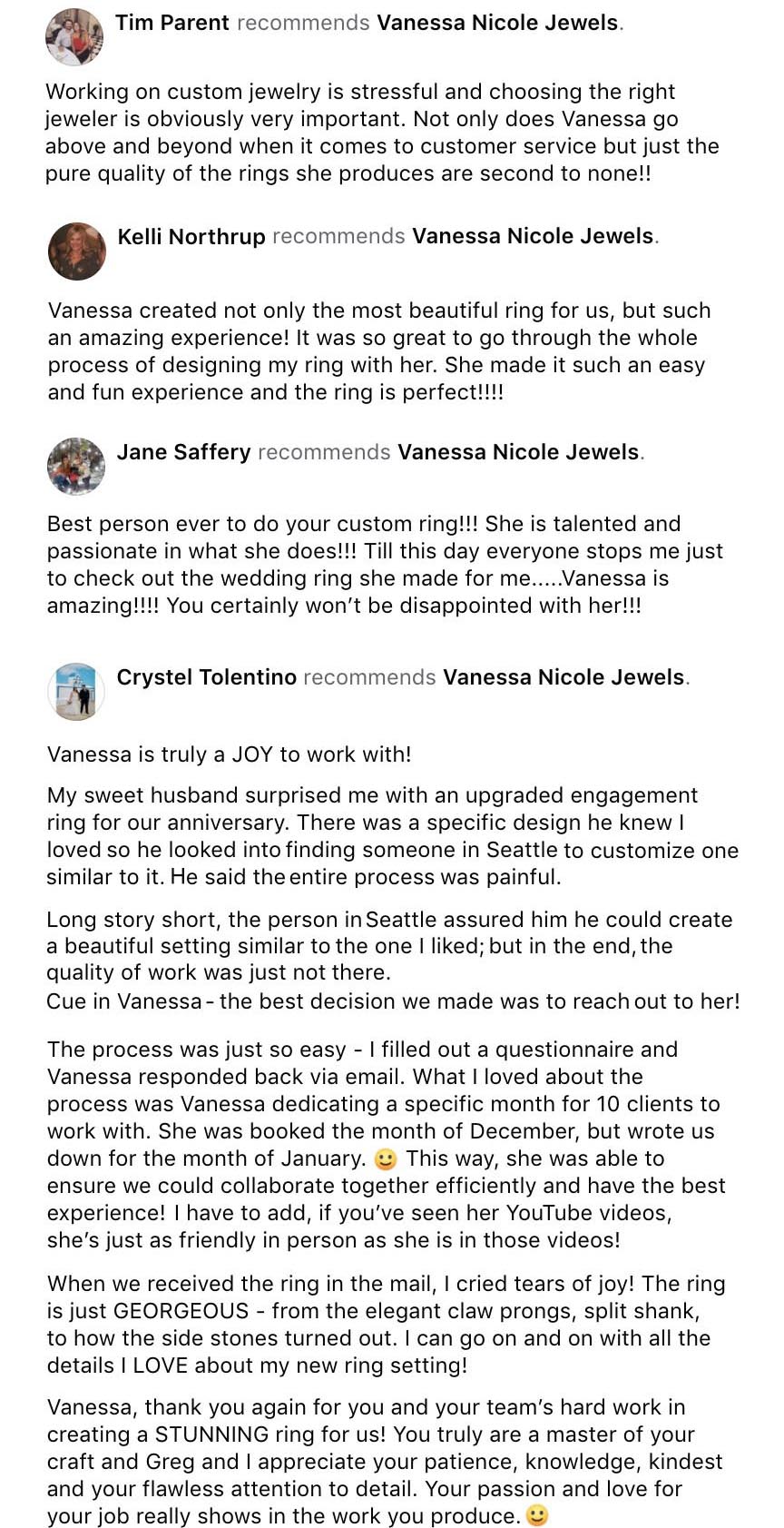 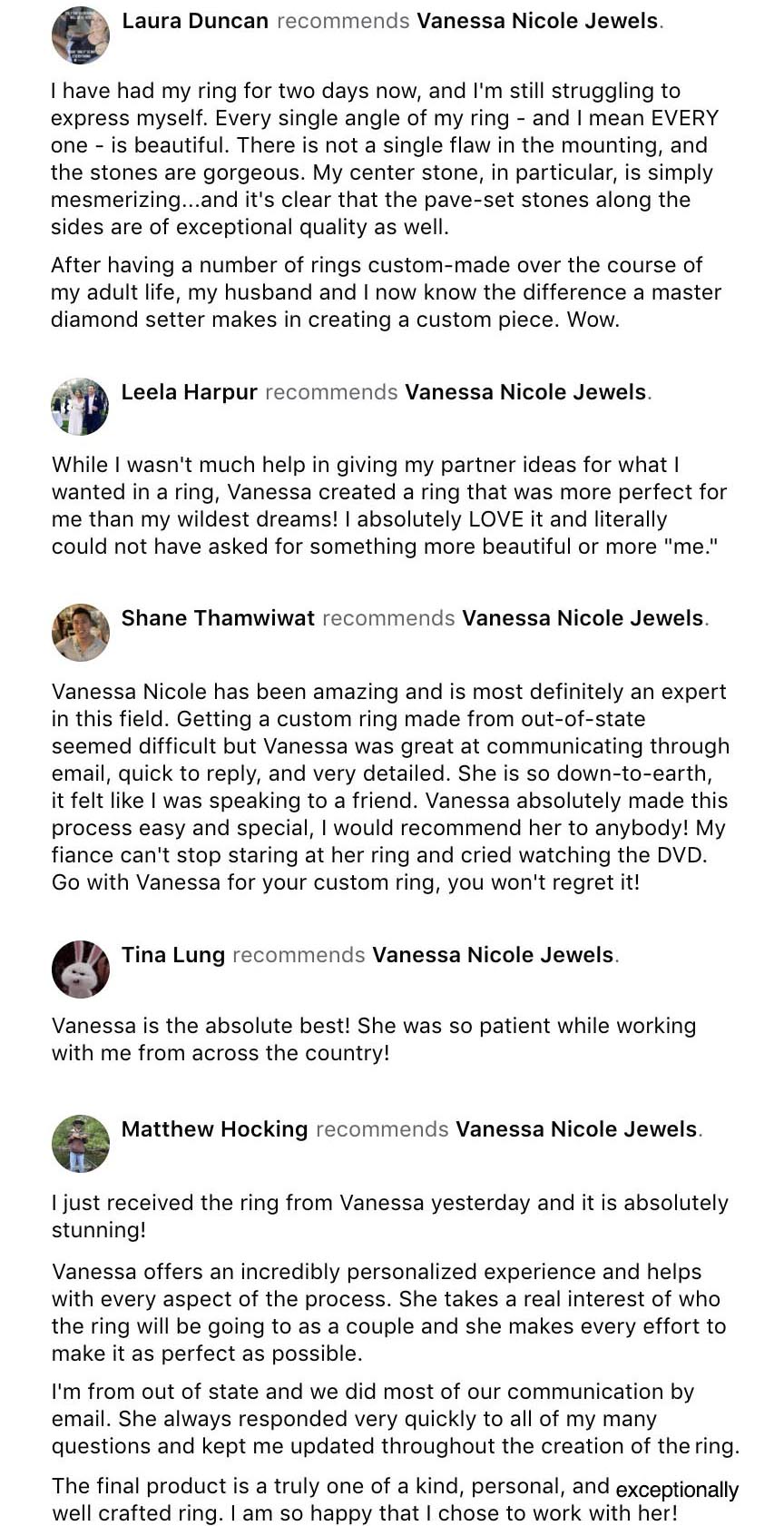